After eight long years, Italy has announced to take workers from Bangladesh on seasonal visas. However, the list includes 24 more countries along with Bangladesh. Applications can be submitted from the 13th of this month to the last day of the current year, 31st December, the country’s home ministry said.

However, Bangladesh has been blacklisted since 2012 in various scandals, including not coming back on a part-time visa as per the agreement. Later, Bangladesh was removed from the black list after 6 long years through diplomatic talks with Bangladesh on this issue. However, Bangladesh is followed by Albania, Algeria, India, Bosnia, Philippines, Egypt, Korea, Ethiopia, Gambia, Ghana, Japan, Mali, Moldova, Morocco, Kosovo, Montenegro, and Pakistan, Macedonia, Senegal, Serbia, Sri Lanka. , Tunisia and Ukraine.

Applications can be sent starting from:

Applications can be submitted until March 17, 2022, and will be dealt with by the One-Stop Shop for Immigration on the basis of the respective chronological order of submission. 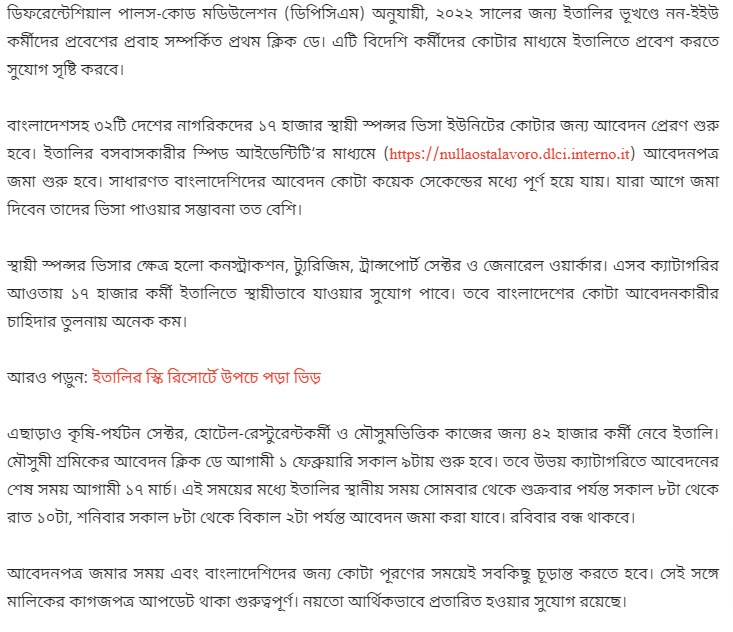 How to apply Italy Visa For Bangladesh 2022 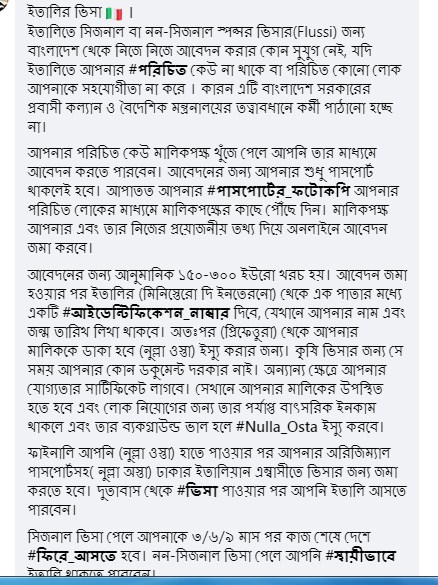 However, the leaders of the Italian Bengali community have requested the Bangladesh government to keep an eye on the old scandal so that it does not happen again this year. They think that due to the good diplomatic relations of Italy with Bangladesh, after 6 years, Italy has given the opportunity to Bangladeshis to come to the country legally again. However, if Bangladeshis come to the country on a seasonal visa this time and do not return after the expiration of the agreement, then Bangladesh may be included in the black list again later.

Immigration experts say that Bangladesh has been blacklisted in the Gazette of Seasonal Visas since 2012 as 98% of Bangladeshi workers came to Italy on seasonal visas and did not return after the expiration date as per the agreement. However, after 8 long years, the name of Bangladesh was dropped from the black list this year. Therefore, Bangladesh has to be vigilant so that the old incidents do not happen again this year as well. If such incidents happen again, the Italian government may be harsh again for Bangladesh.

However, these immigration consultants are definitely blaming the brokers of Bangladesh for this incident. They say that even though it costs a little money for a worker to go to Italy on these seasonal visas, the middlemen sell these visas to the workers at high prices. So these workers are not able to withdraw the amount equal to the value of the visa within the stipulated time and they stay in the country illegally. So the government caught these brokers and brought them under punishment.

Note that an employee on a seasonal visa can go to Italy and work legally for nine months. Later, when his contract expired, he had to return to his home country. They can also visit the country on a priority basis on seasonal visas next year. After going there three times, they were allowed to stay there permanently.